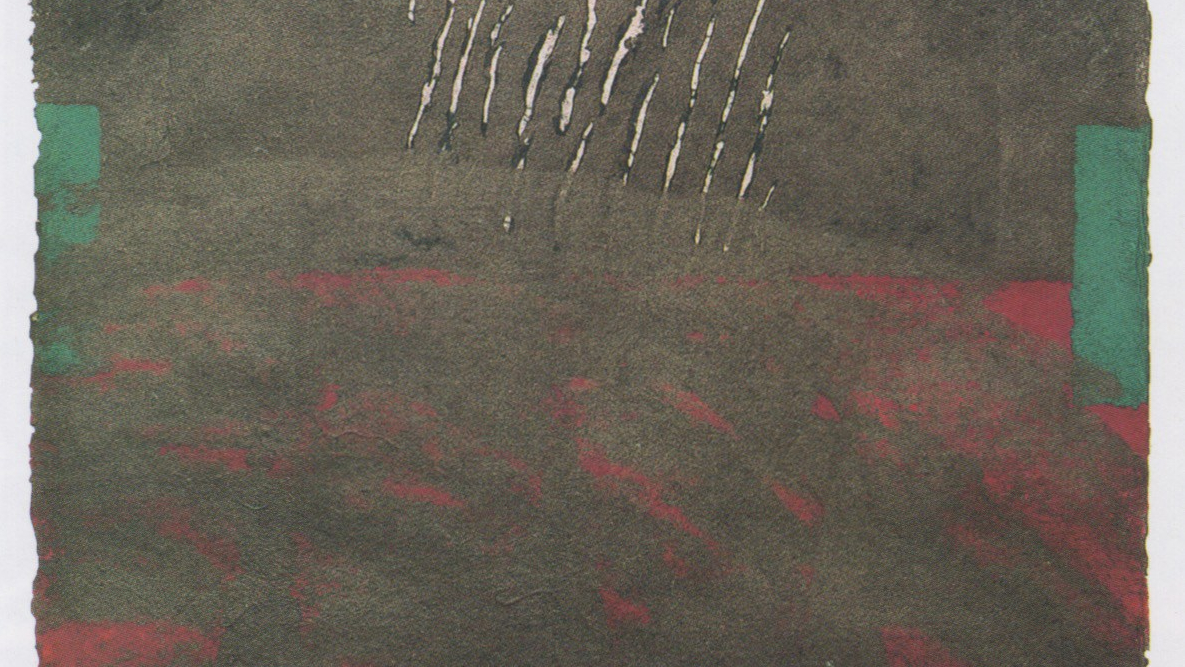 Akira Kurosaki was born on January 10, 1937 in Manchuria, China, but his family returned to Japan shortly after the Second World War. While a teen, Kurosaki sensei’s father arranged for him to learn painting. It would be his father later who forbade him from pursuing painting as a course of study as he believed art to be financially unstable. With his father’s ruling, Kurosaki sensei studied Design at Kyoto Institute of Technology from which he graduated in 1962. Despite the conflict with his father’s interests, Kurosaki sensei emerged from academia yet an artist.

It wasn’t long before Kurosaki sensei became an associate professor at his alma mater, Kyoto Institute of Technology, where he remained until 1968. During his initial stint as professor Kurosaki sensei began creating the first of his abstract and surreal works. These works used the guise of western modes of painting that were in fashion at the time, to create artworks that would explore the psychology of traditions and ideologies of postwar humanity. Navigating printmaking, painting, collage, and eventually papermaking, Kurosaki sensei embarked on a trajectory that would help him carve a career as an innovative artist.

In 1987, Kurosaki sensei became professor and head of Printmaking at Kyoto Seika University where he established the department of papermaking. His pioneering work in papermaking art was the catalyst that helped bring papermaking into the realm of fine art, producing works throughout his career and especially the 90s that were simultaneously print and paper. Employing innovative and traditional techniques Kurosaki sensei would often require new or modified tools or designs of his own fashioning to create works.

One of his inventions might be familiar to you– in this excerpt, translated by Yuki, Kurosaki sensei writes in his book Shaping Paper, about the purpose behind the development of the Disk Baren:

As one of the most important tools used in mokuhanga printmaking, high quality barens have a long life span, but on the other hand can be difficult replacing the expendable bamboo sheath core of the baren.
Wanting a baren that was easier to maintain but still retained the
technical quality of the traditional baren, the disk baren was invented.
By making a baren out of plastic materials, the quality control is more consistent, parts are easier to replace/repair and the price is more economical.
The traditional baren core is made from white bamboo sheaths that are twisted then laid down into a circular shape. These sheaths create the bumps which are important in a baren to evenly press the paper into the block . The disk baren accurately recreates these bumps with its plastic core. If the surface begins to wear down, there are replacement disks available.
Though the plastic core may look simple to the eye, the final product was achieved through many trials and errors to best resemble the texture and composition of the traditional bamboo cores. Although the bumps are laid in a concentric circular pattern, they are not radial but form subtle waves that help to apply even pressure when in use.

Kurosaki sensei was never one to be held back by lack of capability, nor was he compelled by the impulse to profit. Rather, the sensei’s concerns about the traditional baren stemmed from its impractical inherent qualities–they were inaccessible to most, expensive, and oftentimes burdensome to fix or replace parts. Knowing this, Kurosaki sensei reimagined how the process produced by the baren could be recreated using more accessible means without sacrificing, as he said, “the technical” qualities that make barens so important to mokuhanga. After much testing and consideration for the ability of his new tool, the Disk Baren came to be. Kurosaki sensei showed much respect not only to his own ways of making work but also the way in which those types of work had been made for centuries before him.

For years, Kurosaki sensei traveled the world making art, lecturing, and exhibiting, carving for himself a singular career. Finally, though, he settled back down in his hometown of Kyoto, where he passed in May. Our thoughts and best wishes are with Kurosaki sensei’s loved ones.

One thought on “In Memory of Artist Akira Kurosaki”